skip to main | skip to sidebar

USGF is proud to announce 4 new Jurulatih: Carlos Carpintero, Tim Abner, Roehl Llanes, and Luis Portela. Congratulations to you all! 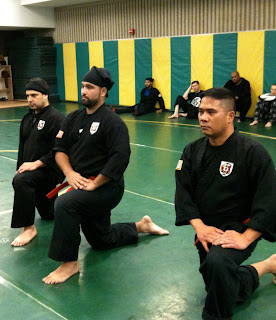 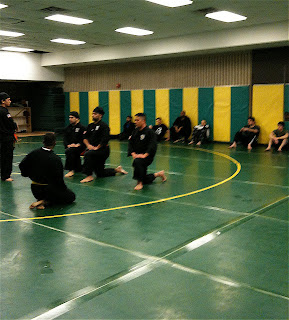 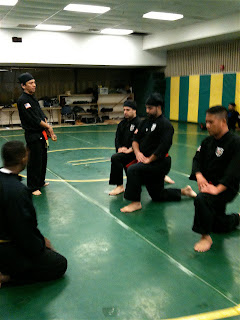 Today, class got me thinking. Daniel and I are testing and one of the many things we've had to do is to break boards today with hands and feet. We've done both before, so the element of surprise isn't there. What did surprise me however was the recations from some of the people who were watching us. Having been in Gayong for a while, I have forgotten my own personal reactions to seeing and doing some of the "tests of faith."
Some of the "Tests of Faith" in Gayong include, walking on broken glass, mindi minyak (boiling oil bath), walking on charcoal, jumping through a ring of fire, cutting the arm with Parang (machete), breaking boards, breaking tiles, and many other things. Writing these things now, to me is familiar, while you reading this may be gaping at the words. What I say next is a bit controversial so I apologize if you are offended. These things are explained by physics. I am not a physics professor so if you have specific questions, go to your local college and ask. ForceXTime equals results or something like that. I was a literature major, go figure.
So why do we do these things if they can be "explained away" by physics? Read the title of these crazy things- "tests of Faith" not "tests of physics." Physics can explain the mysteries of the tests of faith, but what it won't do, is give you the experience of actually doing it. You're head may have done the math problems to explain that you won't die or cause morbid injury, but can your heart go through with putting your hands in boiling oil. Yes, the oil is boiling. Watch the Nat Geo show, you can hear oil sizzling and popping as the bubbles break the surface. It's really intimidating. You consider yourself a sane person, so why the heck are you going to dip your hands in boiling oil?! That's what these tests are for. They test your will, your heart, your desire. They don't test your physics knowledge. Can you muster up the nerve to go through with the "crazy" thing your Cikgu just asked you to do?
There are lots of people in the world who read about different places in the world. I went to Malaysia. Before I went to Malaysia, I read lots of books on the culture, food, etiquette, looked at maps to see where we will be going, and looked a photos and video of the area. Then I went to Malaysia. I read about Durian, how it looked like a green spikey american football, and was very smelly. Guess what! It's SMELLY! Think gym locker room. *As an aside, there's a tv show called Bizarre Foods on the Travel Channel here in the US. This guy goes around the world trying local delicacies. He's eaten intestines, testicles, rodents, bugs, BUT he couldn't eat Durian! * There are signs up all over KL that have a photo of a durian with a slash through it, it's not allowed in hotels, malls, and the rail system. They don't tell you that in the guide books.
You can read all you want and do the math and rationalize in your head, that this won't hurt me. But until you take that leap of faith and do it, it's all just a theoratical situation. The tests are meant for your heart. If you have the resolve, and the will, you will take that leap and further your understanding of Gayong and yourself.
Posted by USGF at 2:53 PM No comments:

There will be a COD USGF Club meeting a towards the end of February (date finalized soon)- on a Satuday after class. We will discuss many things and I want all members to bring ideas and suggestions to the meeting.
To be discussed:
This meeting will last at least 2 hours, all officers should attend. Please be prepared as this should be a round table style discussion. Joel can join in via skype if he's not working and wants to join us.
Check here for more information on the date and updates on the agenda in a couple weeks!
Posted by USGF at 3:39 PM No comments:

United States Gayong Federation attended a Student Activites Fair at College of Dupage to help promote our new college club. There were about 50 various clubs there. We got some good traffic and helped spread the word about Silat Seni Gayong. Thanks Tim and Luis for sitting with me and promoting for three hours! 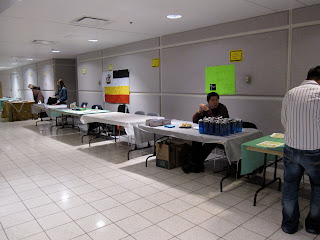 Line Up of Club tables 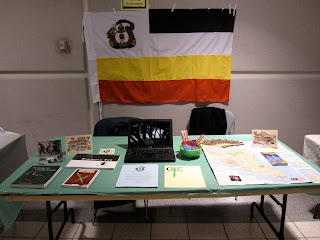 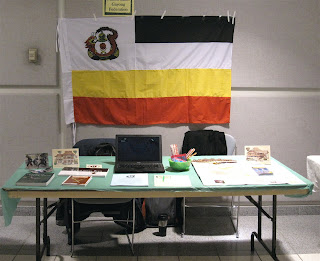